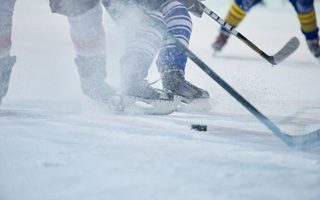 When National Hockey League (NHL) superstar Sidney Crosby suffered two concussions within days of one another, he looked for help from his chiropractor, Dr. Ted Carrick, a Chiropractic Neurologist who treats Crosby and many other players in the NHL and NFL. Carrick says, “In professional hockey alone, there are more than 50,000 hits annually, and far too many of these are serious injuries to the head.” Hockey is a rough contact sport, as anyone who has been to a game can attest. As Rodney Dangerfield once famously quipped, “I went to a fight the other night and a hockey game broke out.”

The risk of concussion during a hockey game is extremely high, with pucks traveling at speeds of up to 100 mph. Also, include the injuries from players colliding with each other, or being hit by hockey sticks and skate blades and you can easily see why hockey is a sport prone to injury. Unfortunately, the numbers of neck and back injuries have increased, possibly due to the false sense of security provided by the large amount of protective equipment used. The knee is one of the familiar place to pick up an injury, with sprains to the ligaments being extremely common.

This excerpt has been shared from an article originally published on heallikeapro.com. Please click here to read the full article.